Scouting around to find a feel good story with which to close out this work week I came up with this. 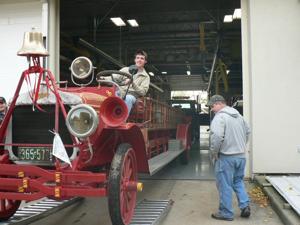 A 1924 Sterling fire truck, manufactured by Peter Pirsch & Sons Co. of Kenosha that served the Jefferson Fire Department for 44 years arrived home Tuesday, Oct. 31. The department won the truck in an auction with a bid of $8,500. Above, firefighter and “ace mechanic” Nick Drew steers the truck as it’s unloaded into the Jefferson Fire Department apparatus bay Oct. 31.
Reads the caption accompanying the picture.

The neighboring city of Jefferson, Wisconsin repurchased an antique, restored fire truck that it had once purchased before.  In 1923 the city went looking for just such a truck and found it.  The cost back then was $5,850 in terms of today’s money that is equal to an expenditure of $84,384.71 however, as the article points out modern fire suppression equipment cost isn’t linear.  The cost to the city along with 5 municipalities that contract for fire suppression services for a modern fire truck recently purchased in 2016 was $550,000 .

The antique fire truck left Jefferson, back in 1968 and eventually found it’s way to Oklahoma

“After very thorough and careful consideration, we have concluded that the Sterling Motor Truck bid in the sum of $5,850 is the most suitable apparatus for the particular needs of our city,” the committee said, according to minutes from the meeting.

The truck was manufactured by Peter Pirsch & Sons Co. of Kenosha. The specifications sheet is dated March 11, 1924.

Two months later, the completed truck was stamped with the date May 10, 1924, and it was sent on its way to Jefferson.

Eventually the fire truck made it’s way into the collection of John Lewis and was displayed in a privately owned museum that was open to the public and free of charge.

The collection was displayed in the Lewis Fire, Transportation and Farm Museum in Lawton, Okla. Lewis established the free, private museum with his wife, Jane, in 1986. . . In one of the letters, dated Aug. 22, 1990, Lewis explained that he had built an additional building for the museum and Jefferson’s truck was “the center attraction in that building.”. . .

To make a long story short the city of Jefferson, wanted the truck and  funds were approved up to $10,000 and an additional $3000 for transportation costs.  During the bidding an announcement was made to the audience that a representative from the city of Jefferson was on the phone and they wanted to bring antique fire truck back home.

Around 3:30 p.m. that day, a man who had attended the auction called the fire station.

According to the man, he was standing next to Jefferson’s truck when Moore stopped the auction to announce to the attendees that “Jefferson was on the phone and they wanted to bring their truck home.”

Moore apparently explained that a Jefferson representative was unable to be present because of a large festival in town, but that the department was bidding online and currently were on the phone.

“Somebody in the crowd, we don’t know who, started a chant, ‘Send it home!’ and the bidding stopped and we were awarded the truck,” Wegner explained. “We do know that there were others that were interested in this truck and, I think, quite frankly, they got blackmailed by whoever was chanting in the crowd.”

The truck arrived at the fire house on October 31 late in the afternoon.  By 11:51 that evening the engine was running and a magical mystical moment was shared by those that have love for the past.  Donations are being accept to help payoff the costs of buying and shipping the truck back home.

This site uses Akismet to reduce spam. Learn how your comment data is processed.